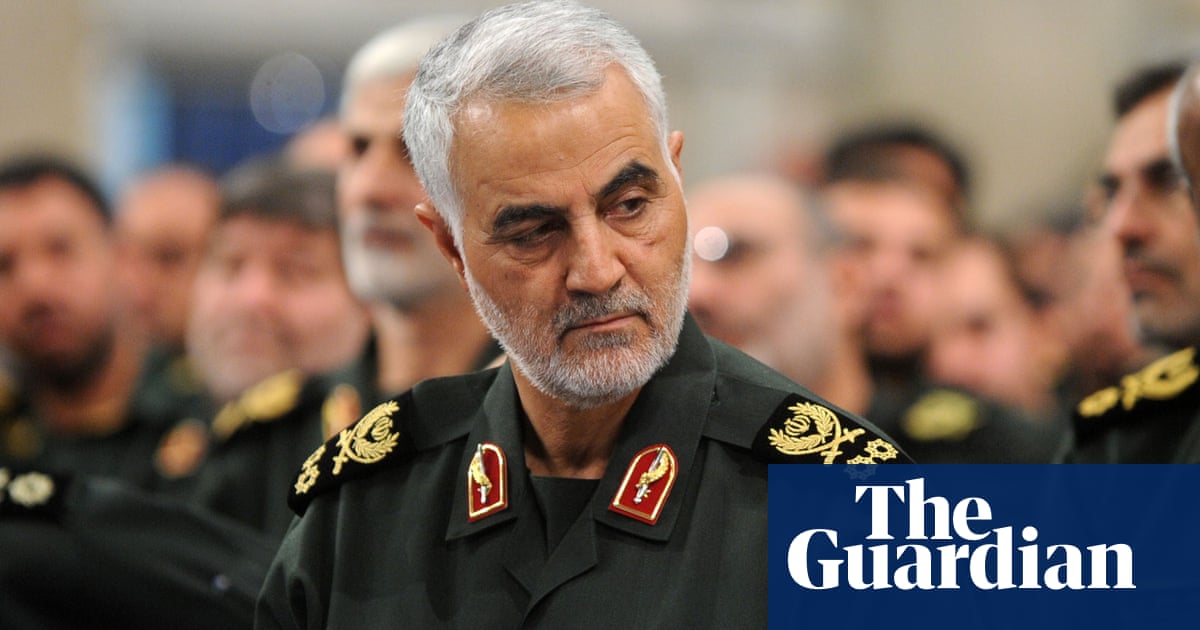 Qassem Suleimani, who has been killed in a US drone strike in Baghdad aged 62, was widely considered to be the most powerful man in Iran after the supreme leader, Ayatollah Ali Khamenei and its leading military figure. Suleimanis assassination has plunged the Middle East into a crisis that seems likely to lead to further escalation between Washington and Tehran.

Suleimanis importance depended on his role as commander of the elite Quds (Jerusalem) force of the Iranian Revolutionary Guards Corps (IRGC), which is the strongest organ of state security in the Islamic Republic. In recent years it has spearheaded Tehrans growing influence across the region, alarming the US, Israel and conservative Arab states led by Saudi Arabia, and widening the sectarian divide between Shia and Sunni Muslims.

The Quds force undertakes non-conventional warfare and covert military activities abroad, maintaining networks with religious and political groups to further Irans strategic interests. Allies and proxies include Hezbollah in Lebanon, the Houthis in Yemen and the Palestinian Islamic Jihad in the Gaza Strip. It specialises in intelligence, special operations, arms smuggling and political action anything that protects the revolution or weakens its enemies. In 1992 it was reportedly behind terrorist attacks on the Israeli embassy in Buenos Aires and in 1994 on a Jewish community centre in the city.

Suleimani had been closely involved in neighbouring Iraq since the US-led invasion of 2003. It was rising tensions there that led the US to kill him at Baghdad airport, along with a commander of the Iranian-backed Popular Mobilisation Forces, Abu Mahdi Al-Muhandis. Suleimani was known variously as the viceroy of Iraq or the supreme puppeteer and regularly described as shadowy. In the Middle East he was known respectfully as Hajj Qassem.

The IRGC and the Quds force have also been significant players in the Syrian conflict that erupted at the height of the Arab spring in 2011. Iranian support for the Syrian president Bashar al-Assad was key to helping him survive, along with direct Russian intervention, which according to some sources was orchestrated by Suleimani. Tehrans version is that it has defended Syria against Saudi-backed takfiri extremists, with no mention of an uprising against an authoritarian ruler who leads Irans most important Arab ally and is a fellow member of the axis of resistance. Suleimani was involved in the defeat of Syrian rebel forces and the jihadi al-Nusra front at the battle for Qusair in May 2013.

Suleimani was seen as the mastermind of Irans search for regional hegemony, from the project to upgrade Hezbollahs missile arsenal for use against Israel to backing the Houthis against the Saudi-led coalition. Suleimani is arguably the most powerful and unconstrained actor in the Middle East today, wrote the US general Stanley McChrystal last year.

Suleimani embodied the view of his generation that the US is the Great Satan that encouraged Saddam Hussein to attack Iran in 1980. Unrelenting hostility to the Zionist regime is reflected in the name of the unit he led for more than two decades. His own name will always be associated with the period when, as was often claimed, Iran controlled four Arab capitals: Baghdad, Damascus, Beirut and Sanaa.

Suleimani was born in the south-eastern Iranian province of Kerman. His father, Hassan, was a farmer. Qassem left school at 13 to help his family survive and later became a technician for a water authority. He turned 22 a few weeks after the 1979 revolution and began his military career at the start of Irans conflict with Iraq in 1980 the longest conventional war of the last century, which left more than a million dead on both sides in eight bloody years. It was a hugely formative experience. Suleimani rose to be a divisional commander and provided support for anti-Saddam Shia and Kurdish groups inside Iraq. In 1987 a unit under his command was attacked by Iraqi shells containing chemical weapons.

After the war he was deployed to Irans eastern border to fight Afghan drug smugglers. In 1998 he was appointed commander of the Quds force. The following year, with other IRGC commanders, he warned the reformist President Mohammad Khatami to crush student protests. For years Suleimani kept a low profile and was almost unknown. He came to the attention of outside powers in the wake of the 9/11 attacks on America and the 2003 invasion of Iraq, when there was limited cooperation with the US in the war against Al-Qaida and the Taliban in Afghanistan.

But Iranian influence with Iraqi Shia militias soon came to involve attacks on US forces. Suleimani, by many accounts, was also prepared to deal with Sunni militants. In 2007 he famously sent a text to the US general David Petraeus, saying: I, Qassem Suleimani, control the policy for Iran with respect to Iraq, Lebanon, Gaza and Afghanistan. And indeed, the ambassador in Baghdad is a Quds force member. The individual whos going to replace him is a Quds force member.

Public landmarks in his career included a speech he gave on Jerusalem Day in October 2006 following the second Lebanon War, when he praised Hezbollahs resistance as a model for Palestinians fighting Israel. He was spotted in conversation with Imad Mughniyeh, the notorious Hezbollah security operative who was assassinated in Beirut by Israeli agents in 2008.

In 2011 he was promoted to major-general by Khamenei, who described him as a living martyr. That year his name was mentioned in an alleged plot to hire a Mexican drug cartel to kill the Saudi ambassador to the US; he was then blacklisted by the US as a global terrorist.

From 2014 he began to acquire a far higher, almost mythical, international profile, appearing on social media visiting Shia frontline fighters in Iraq or Syria though the nickname Supermani was invented by a Lebanese satirist. Domestic critics described him as self-promoting, fuelling speculation about his political ambitions. That sense of celebrity lasted beyond his death, when it was reported that he had asked that he be buried in the martyrs cemetery in Kerman and described as a simple soldier.

He is survived by his wife, three sons and two daughters.