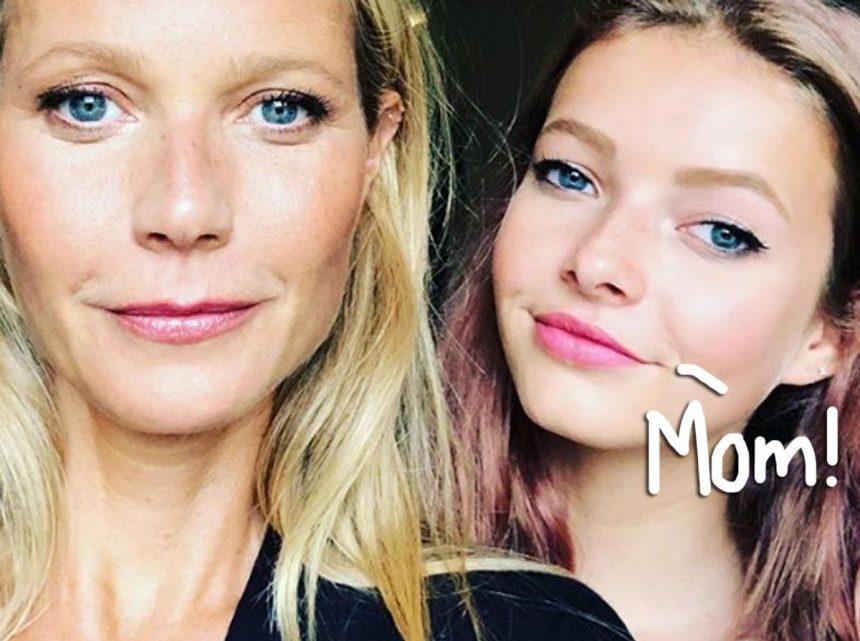 Even celebrities get in trouble with their kids sometimes!

But who knew it would be in the comments section of a social media app??

On Sunday, Gwyneth Paltrow posted a snowy selfie of herself and daughter Apple Martin riding a ski lift to Instagram, and even captioned it with cute emojis:

Unfortunately, the candid post didn’t go over well with the teen, whom she shares with ex-husband Chris Martin.

While the 14-year-old’s face is half covered by her huge ski goggles, you can see (below) she’s not sharing the same happy expression as her A-lister momma.

“Mom we have discussed this. You may not post anything without my consent.”

“You can’t even see your face!”

See the exchange (below).

Sure, Paltrow has over five million followers on the app, but can you blame a momma for wanting to share a happy moment with her daughter for them to see?? After all, the last time the 46-year-old shared a selfie of them together (featured up top) was this past September when the actress celebrated National Daughters Day!

To be totally fair, the young girl keeps her own IG private, and might prefer if her life wasn’t so public with her famous parents! Although, it’s hard to tell if she was even serious about the consent request in the first place.

And it seems like even the comments are divided on the matter, too, with Instagram users chiming in support of Apple or in defense of the Goop founder!

Take a look (below) at some of the reactions:

“I agree with @applemartin on this. I have 2 teenage sons and now that they’re old enough to be effected by something I post I always ask them if its ok first. It’s a simple show of respect for them, the same as we expect them to show to us.”

“‘I’ll post whatever the hell I want!’ That would’ve been my response. People, stop trying to be your kids BFF and in this case that she ‘sassy’ is referred to her, what she really is simply disrespectful! My Mom adored me, but if I wrote or spoke to her in a similar tone, she would ‘knocked me to the middle of the week! Don’t let your kid run your life, show tthem that you are the one that’ll runs# the show.”

“@applemartin I don’t think I normally agree with a teenager about something like this but I totally do. I don’t know much about Apple she doesn’t go in the public eye. Maybe she wants to keep it that way. Her mom has over 5 million followers. Maybe that’s why she doesn’t want her sharing pictures like that. I don’t think it sounds like she’s being entitled maybe she just wants privacy because it’s really hard to be a child of a famous person and actually have a normal childhood. Gwyneth Paltrow is ultra famous and would be recognized it no matter where she went. And if she posted pictures of her daughter every day everyone would recognize her too. Maybe a 13-year-old doesn’t want to have that type of notoriety all the time. Food for thought.”

“@applemartin and you couldn’t tell your mother this in person??? Save her and yourself from embarrassment? Kids these day know nothing about respect.”

“Lol you guys made the poor kid delete the comment. It was a joke people. There are several other comments of apple begging her mom to post her more. I feel like people jump at every opportunity to criticize Gwyneth. I will make it my personal duty to defend her at all times. 😊”

Where do U stand, Perezcious readers?? Should celebrity parents ask their kids for permission before posting a pic or do they get to decide?

Sound OFF in the comments (below)!